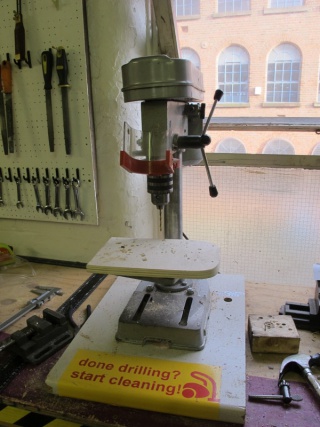 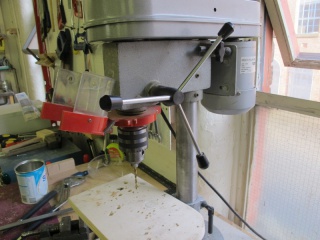 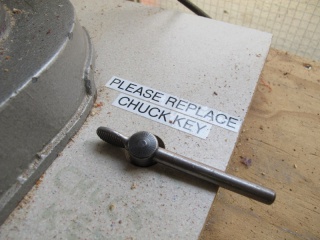 Mounted on a piece of heavy kitchen worktop to provide a stable base. This tool is now stored in Hackspace 2.5, The blue Record pillar drill, purchased as part of the pledge drive, has been brought upstairs to replace it.

Normally set to the middle speed range - adjust it by pulling forwards the motor using the handle at the rear, locking it in this position using the securing lock on the right-hand side. Squeeze the spring as tight as possible using one hand before locking with the other.

It is easiest to first slip the belt up or down the stack of reducing pulley sizes, then adjust the other (increasing size) end to arrive at the correct position. Then release the locking screw to allow the motor to return to its normal running position, making sure that the belt is seated squarely in the pulleys and is not twisted. Close the belt cover and check that the drill runs quietly and smoothly (as far as possible) before using it. Check for a twisted or damaged belt if this is not the case.

Like many similar low-cost drills, the accuracy of the chuck is not brilliant.

The depth stop is broken.

Repaired, as far as possible. Note that the stop causes the drill axis to wander - it's best to use the depth stop as a visual cue rather than a mechanical limit.

After misuse of worn and inappropriate chuck keys, the original chuck became damaged (Jan2013), and it became more and more difficult to tighten securely, causing consequent damage to drill bits. A replacement chuck (physically larger, though with the same drill-size range) has now been fitted. (Apr2013 Dclarke (talk))

Once again, the depth-scale has become detached, and the depth stop broken.