From Nottinghack Wiki
Revision as of 22:11, 9 August 2019 by Danspencer101 (talk | contribs) (Seems to be being used so Im making this project dormant for now)
(diff) ← Older revision | Latest revision (diff) | Newer revision → (diff)
Jump to navigation Jump to search

This project is aimed at making the area around CNC machine a bit tidyer. The aim is to provide clear storage for a small selection of tools. Possibly also storing cutting bits that could have a linked Fusion 360 Tool Library.

Currently, The collets and tools are currently sitting loose on the stepper controller under the CNC PC monitor. I would like to get some kind of tool rack made to better organise the area. The rack should make it clear what each tool is and will have a physical link via a QR Code, or similar, to a Fusion 360 library containing the recommended Speeds & feeds for that tool. 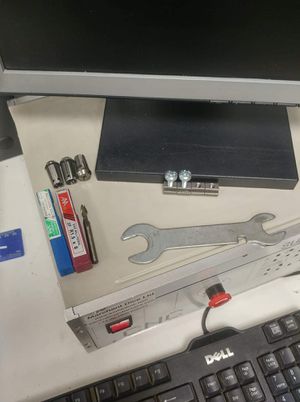 My initial thought is that this will be a small set of drawers that can expand as required in a modular way. 3D Printing is a good way forward potentially as the QR codes can be printed in with each drawer. Each size group could also be produced in a different colour; this will aid understanding of spindle speed/ feed rates. E.g. Blue tools will need a 15000rpm spindle speed, Red tools will need a 10000rpm spindle, etc.

The rack should be aimed at beginner CNC'ists and should cater mainly towards cutting wood. People who want to cut harder materials like aluminium will likely bring their own milling bits due to high risk of snaps.

At a minimum I would like the rack to hold:

This will sit next to the desktop that drives the CNC on the table. The design should also feature the ability to be wall mounted if required in the future.

10 bits can be stored laying flat in the tray. Awkward to pick the bits up due to how fiddly it all is.

Collet stored to right of tray alongside relevent bits.

Not a good concept.

A bit better. 10 Bits can be stored with a slight incline so the tips can be grabbed easily. It is still a little awkward due to limited clearance under the tip.

Playing with the idea of a tool setter; could make it easier to understand tool stick-out for newcomers to CNC. A tool stick-out parameter is also shown in the Fusion 360 tool library.

Areas to work on

Some modularity baked in to the design, although at the moment each shelf unit just sits on top of the last. I haven't come up with a way to clip them together yet.

Each drawer is held in place by a spring clip.

Builing on Jon's idea, rather than 3D print the drawers. I think it will be easier to use the CNC to cut out trays that will have a perfectly shaped pocket for each tool. Less emphasis on storing lots of cutting bits as we are asking members to bring their own tools anyway.

I have taken a picture of all the tools here and will bring this into Fusion 360 to produce the CAD model of the tray.

Also, some observations about MDF. It's horrible; avoid like the plague if possible. It doesn't really form chips, just piles and piles of sinuous dust that gets everywhere. Might cut better with a down cutting tool.