This summers big hackspace infrastructure project is to rewire the lighting throughout the whole space.
Of course being a hackspace we are adding our own techno touch to this job :)
Thanks to an unnamed member we have a growing stock of second hand fittings that will be used to replace the existing 8ft fittings.
The plan to rewire also includes a move to better zoning of the lights and will call for 17 zones over the existing 9.
This quick plan shows the various zone that will be individually controllable 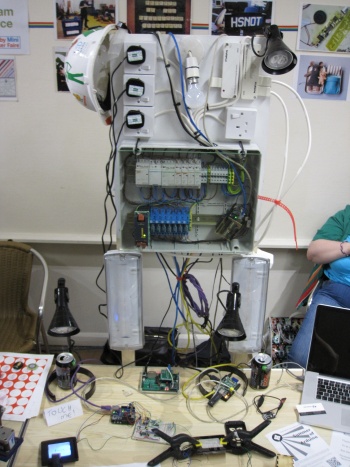 Each control box will house contactor's, relays and a networked micro-controller.
A contactor is a 240v electrically controlled switch, like a relay but for much higher current
Each contactor is switched via a 12vdc relay, which in turn is switched via an arduino and MOSFET setup
5vdc Relays would remove the need for the MOSFET but they are much harder to acquire and cost a lot more
Micro-controller in each control board is likely to be a Xino (arduino clone) and a Wiznet Ethernet shield
Again thanks to generous donations we have 17 contactor's and relay holders already at the space.
The 12vdc relays will be ordered from rapid code 60-0905, along with appropriate MOSFET's

Two main switch panels and various smaller control points will be mounted around the space
Two larger panels, one in the workshop and one by the last man out switch in the comfy area.
The two large panels will be custom laser etched box's with plan view maps of the hackspace, each lighting zone will have a momentary push switch, possible lit when the lights are out
Again for control in the large panels we will use Xino's and Wiznet shield's
Each panel will need a 5v power supply and network connection

Smaller 1 or 2 button switch box's will be mounted in the following areas.

The smaller switches will be build from XRF's possible with a ATtiny2313, but only if it can't be done in LLAP firmware on the XRF's
These will only need a 5v power supply as communication will be done over the existing LLAP<>MQTT bridge

After the control box's and the wire runs are in place the job of swapping the light fittings over will begin, most of the 8ft's will be replaced with 5ft fittings and tube's.
There will be a call for help when we get round to this stage.


Firmware is on GitHub
https://github.com/NottingHack/Lighting-Control

The system will include an ambient light sensor to detect if its dark outside, this will be used to automatically turn certain light's on.
If its dark the hallway light will turn on for 5 minutes any time either of the doors is opened.
On entering the closed space from the hallway, the walkway lights (comfy area & studio) between the last man switch and the workshop will automatically turn on.
On closing the space (last man out switch) and light left on will be automatically turned off.
A web page interface can't be built into the hackspace intranet site.
Mobile phone app
Toilet lights can be on a 30minute(adjustable) timer so they don't get left on.