I have obtained two non-functional decommissioned Lockheed Martin M270 MLRS Fire Control Panels (don't ask!) and I plan to change their purpose slightly from destroying things (up to 40 miles away!) to dispensing salad ("Rocket Launcher" - geddit?)

I spent a couple of evenings working on the second unit and focussing on the plasma screen: it has a built-in VT320 terminal -- or is it more correct to say that it IS a VT320 terminal? Anyhow, I failed to get anything up on the screen. I removed the bezel that masked off the top line (which took a bit of dismantling - I should have took photos!) and then the glorious blinking orange block cursor could be seen. The high pitched noise from the screen was really quite apparent but not too unpleasant to my middle-aged, gig-battered ears. 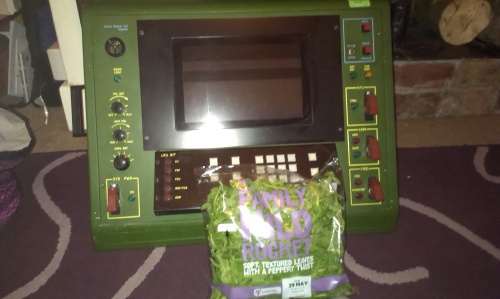