The tools access control device (which still needs to be named) is designed to allow use of the attached tool to be restricted to inducted members, and to keep track of usage for charging purposes. It's been designed with the aim of being easy to fit to multiple different tools if needed (e.g. lathe and mill), not just the laser cutter - although charging for use is unlikely to be used for other tools.

For the Laser cutter, it keeps track of pledged time, and charges by the second for those that didn't pledge, or have used up their pledged time. Any laser usage which isn't covered by pledged time is charged in the same way as the Vending machine, which results in a monthly email, and can be paid off using either the Snackspace jar, or the NoteAcceptor.

The hardware consists of an Arduino, Ethernet shield, RFID module, (optional) LCD and relay, and it communicates with a server side process on Holly using MQTT, specifically an instance of the Mosquitto MQTT broker.

There is a related tool booking system running on HMS, however the interaction with that is limited; booking a tool in HMS currently has no connection to who can or can't sign on to the laser. HMS can be used by any member to see their use of the laser (and any charges as a result), as well as see if the laser is currently in use or not.

The current device on the Laser cutter is a prototype, built on an Arduino UNO (or clone, I can't remember), wiznet based Ethernet shield and protoshield. The second version (intended for the 3d printer) has been built using a custom PCB, see GitHub for the design, and flickr for photos of the mostly assembled device, minus case.

Next version of tools control device

The RFID reader is a MFRC-522 based device purchased from hobby components (HCMODU0016) and connected using SPI, the LCD is a 2x16 I2C display also from Hobby Components (HCARDU0023).

The attached tool is controlled by using a relay on the protoshield - this is intended more for isolation, and not to switch any great load. In the case of the laser cutter, the relay on the protoshield is wired back to another relay+contactor inside the laser cutter which is wired in series with the incoming mains. There are two push buttons; one to allow authorised members to record other members as having been inducted, and one to sign off. There is also a status LED that lights up when the signed in member is authorized to give inductions, and flashes after the induct button had been pressed and the system is searching for a card to induct (the original idea was that the induct button would be an illuminated push button).

This is the second version of the enclosure designed for the version 2 PCB. The design files for the laser cut panels and 3D printer parts are available on GitHub at https://github.com/NottingHack/NH-Tool-PCB 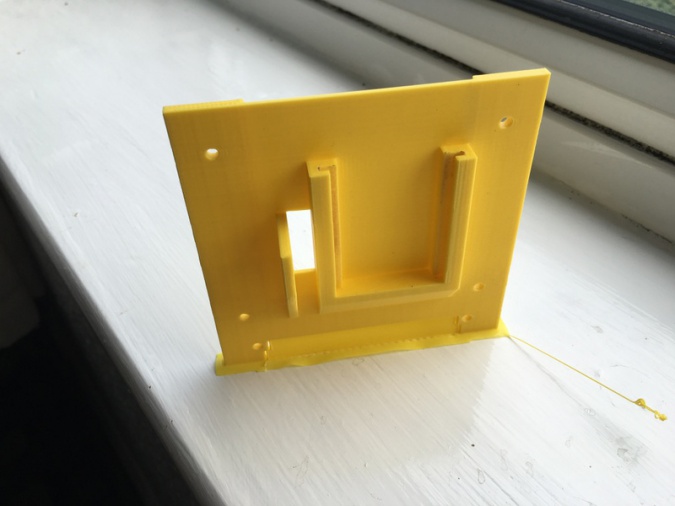 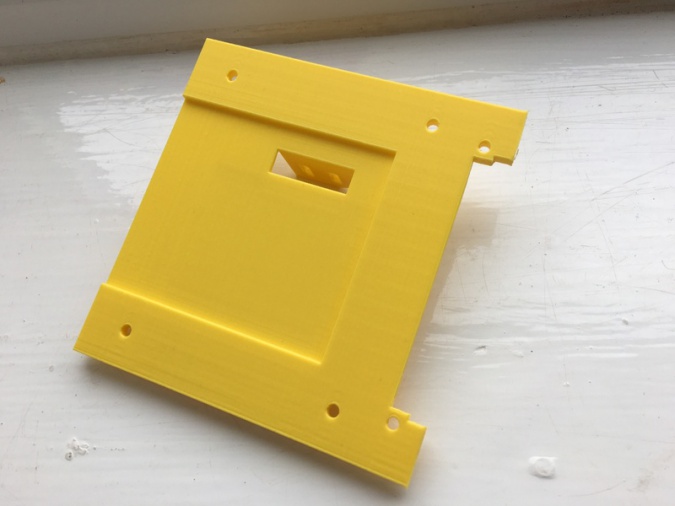 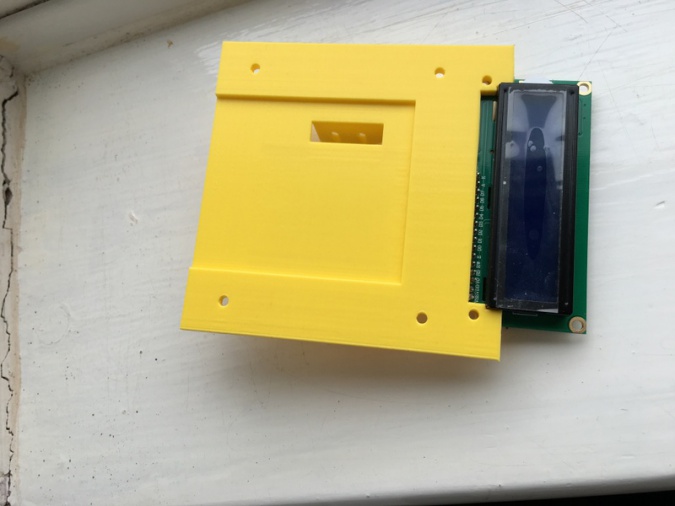 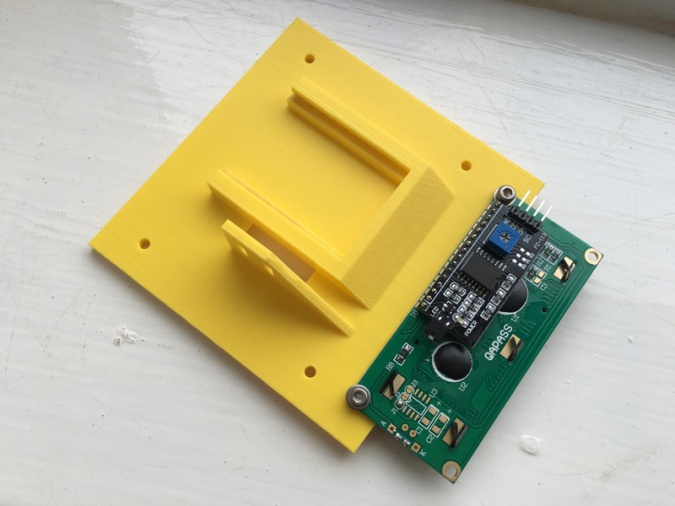 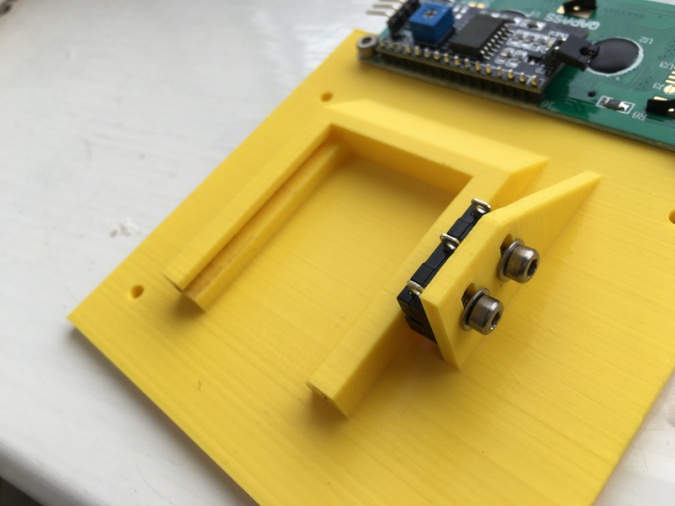 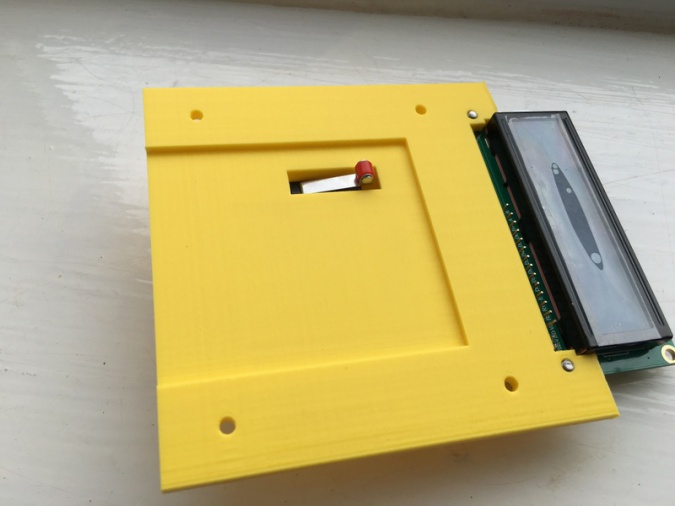 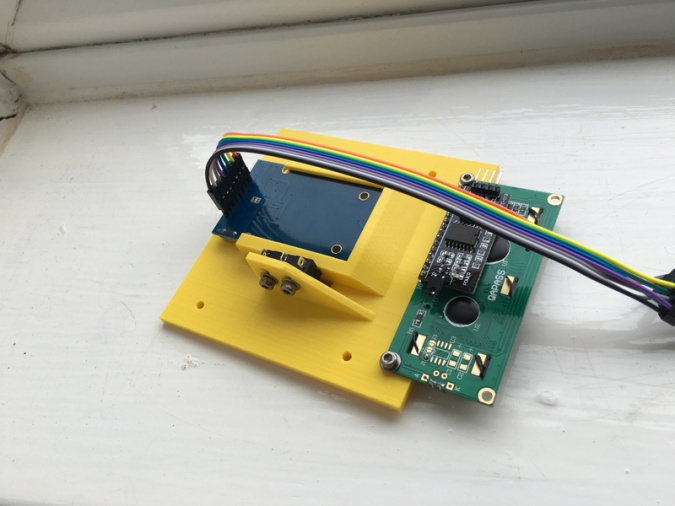 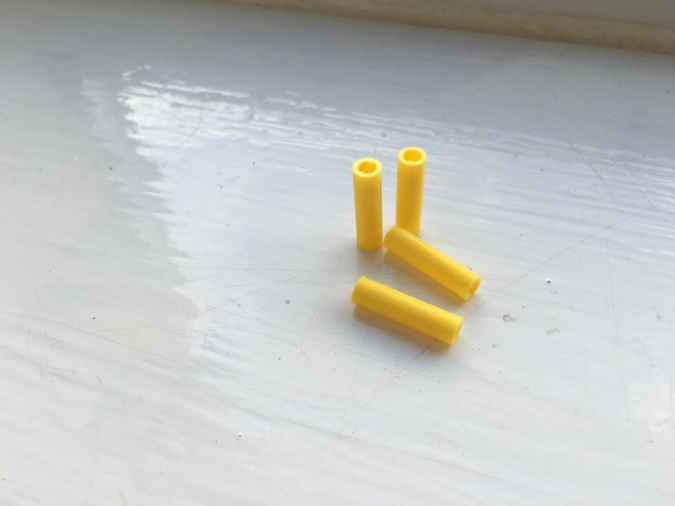 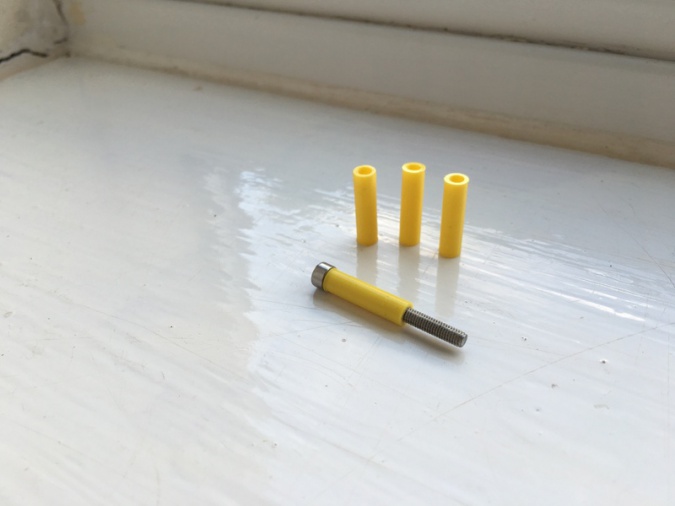 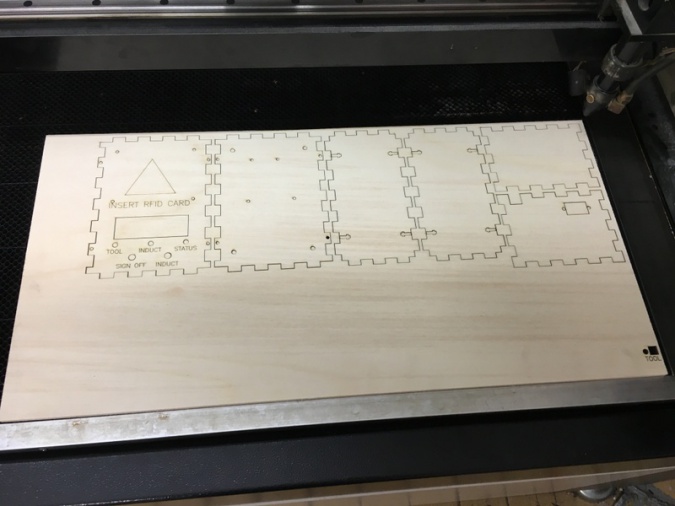 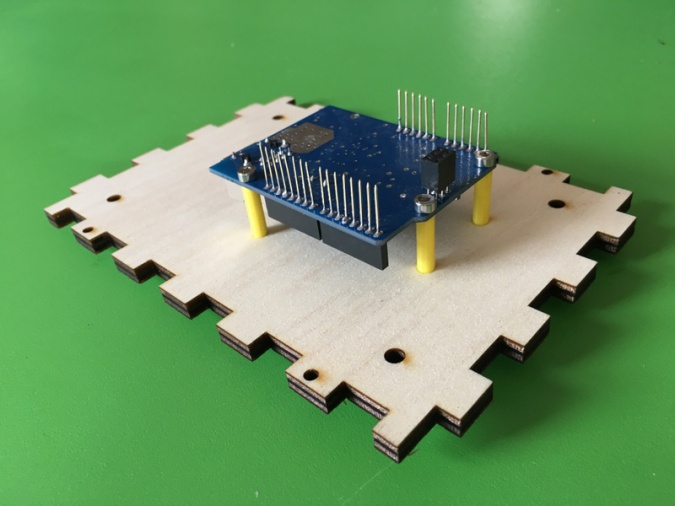 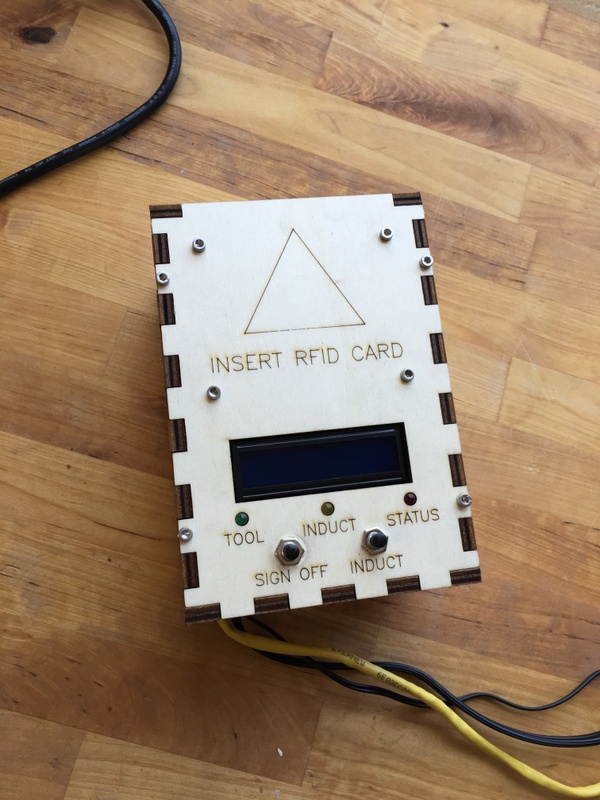 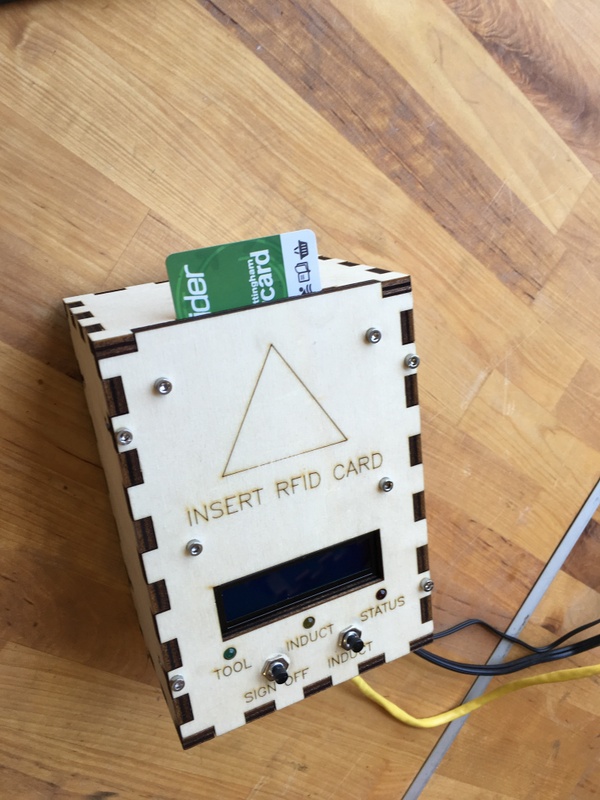 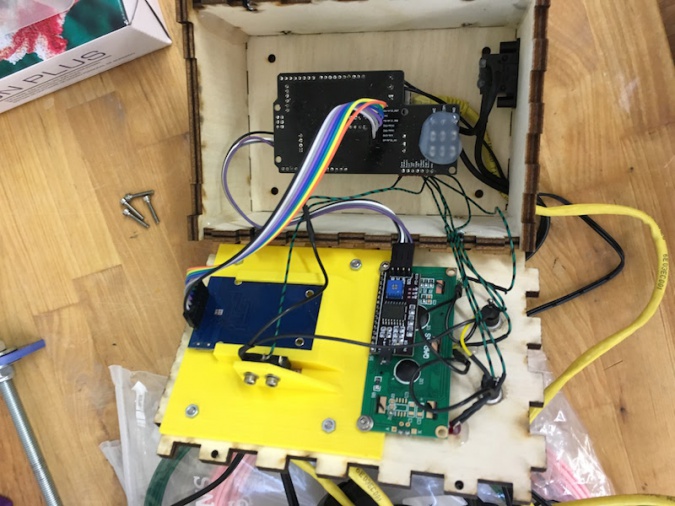 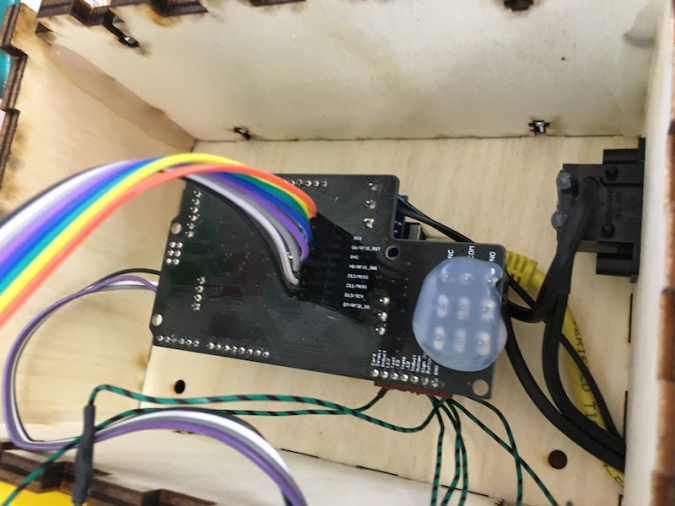 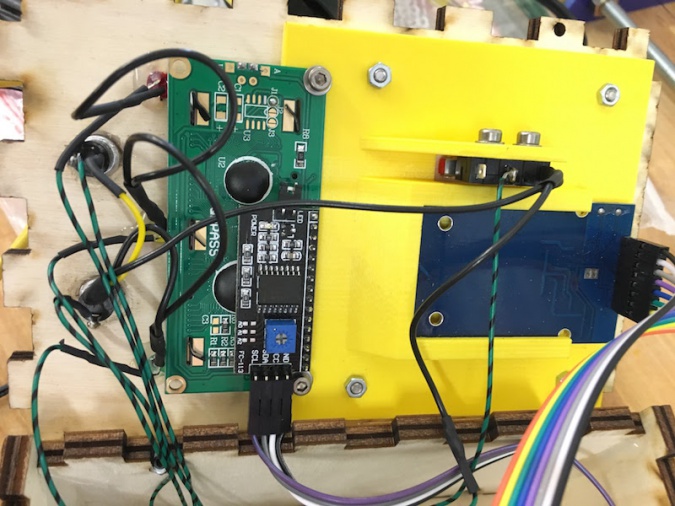 The source code for the Arduino firmware is on GitHub,

The Arduino firmware uses these libraries:

The firmware includes a serial based setup menu to configure MAC/IP addresses, set the MQTT topic and tool name; these settings are stored in EEPROM. The idea is to be able to set up the device for another tool without having to change any code.

The device can be in one of 6 states (valid transitions shown in the diagram), these are:

All communications with the server side is done using MQTT; topic names are comprised of "<base topic><tool name>/<command>". Base topic can be the same for all access controlled tools, but obviously the name must be unique. The base topic currently being used is "nh/tools/", and the name set for the laser cutter is "laser".

The device has a serial based configuration menu (9600 baud, set local echo on) which can be used to set:

The IP address of the server is currently hard-coded to be 192.168.0.1 (Holly), this should probably be added to the configuration menu at some point. Once set, these settings are saved in EEPROM. E.g. showing current settings:

Note that the device must be reset after changing any of these settings - option 6 will reset the Arduino by abusing the watchdog timer.

The biggest problem at the moment is interference from the TIG welder. This either causes the RFID reader to stop reading cards (causing a time-out and sign-off after 15 seconds), or causes the Arduino to reboot, which one happens seems to vary, but obviously neither is good!

There are also issues with the RFID reader not reading some cards - in particular some newer oyster cards. This is probably down to the choice of RFID reader.

The server side component runs on Holly, is part of the Instrumentation project, and is responsible for authorising members to sign on / induct others, keeping track of pledged time and billing for time used. The source code is on GitHub.