Difference between revisions of "User:McMullet"

Who is this guy

I joined the Hackspace because I wanted to enter Robot Wars. I mean, who doesn't, right? Sadly the BBC cancelled Robot Wars, but there are plenty of combat robotics events in the UK that aren't on TV so we built a robot for one of them instead. I'm very bad at working without a deadline, so we imposed one by signing up to a featherweight (13.6 kg) competition with only a month of build time. I've written about that experience on here; I should really get around to writing it up on the wiki too. One day. First I need to update the robot for the next competition... 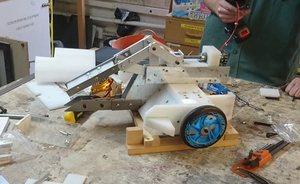 Ensign Wedgeley Crusher, our featherweight combat robot. Here he is locked in a mortal struggle with a drinks can.

I also use the space for the odd bit of DIY, mostly woodwork. Like all DIY projects, however, the main activity is not woodwork but rather procrastination. One day I will also make some Warhammer terrain. Maybe.

Batteries I guess, especially lithium-ion. I've tested a lot of them to destruction so I can probably advise you how to keep them safe and functional.

Don't ask me about

Whether Tornado cheated in the Robot Wars Series 6 Grand Final.