This page is intended to help break down these rather long definitions and to document there intent, how exactly we track this information with HMS and how a member actions can effect them.

The addition of these two definition and the change to 2.7 now allows use to try and distinguish between are active members and our inactive ones. Member that are interested in not just supporting the space or using its facilities but also how its run

The largest real effect of this change is to the number of attendees that we require to hit quorum at an AGM or EGM, previously we require 20% of all members, so for 2019 we had 711 members at the start of the AGM, thus needing 142 attendees.
With the new rules we have approximately 401 voting members, those that have "Physically attended the Nottingham Hackspace" in the last 6 months (Jun-Nov 2019), so quorum would now only be 80 attendees. (This 401/80 is just a quick number using initial data on hand today and not taking into account all parts of the definitions 'RepRap' Matt)

These definitions break down into the 3 basic parts below and the 6 month time split.

If a member has communicated, to the Trustees, their upcoming absence to an AGM or EGM in the last 6 months then they are classed as a voting member.
As a member using actively communicating with the space we assume you have an interest in how is governed/run.

Trustees will be able to record a 'Communication of absence' in HMS. HMS stores this and takes the datetime for use in determining the voting state of a member.

If a member is known to have enter the space with in the last 6 months then they are automatically classed as a voting member.
As a member using actively the space we assume you have an interest in how is governed/run.

This is done via the use of members RFID cards. RFID cards are use at Gatekeeper doors, tools, vending machines and cash acceptors. HMS tracks the last time a card was presented at any reader in the space.

Just using your RFID card to enter the space will update your attendance record, but so will using a tool like the laser or buy a can for the vending machine.

A member should be able to state if they wish to be classed as a voting or non-voting member.
This is about giving the option to distance members to say they still want their voice counted as part of the voting community.
Also allows regular users of the Space to indicated they are just not that interested in participating in how the space is run.

Direct Statement
HMS has a form where members can state if the wish to be a voting or non-voting member, will record the datetime of the most recent declaration to use in calculating status.

AGM or EGM Attendance
Upcoming AGM/EGM's will be scheduled in HMS as soon as the trustees have confirmed the date and start time
HMS is used to do AGM/EGM Check-in tracking and as such attending an AGM/EGM will automatically set voting status
An RFID Check-in terminal will be able to help speed up the check in process at a Meeting
Attendance at the Meeting can then be counted towards a members voting status.

AGM or EGM Proxy
Upcoming AGM/EGM's will be scheduled in HMS as soon as the trustees have confirmed the date and start time
With a meeting scheduled in HMS, members will be able to setup their proxy representation by sharing a link from HMS between Principal and Proxy.
Registration of a Proxy for the Meeting can then be counted towards a members voting status.

Log into HMS, on your home page you will see a box showing your current membership stats and current Voting Preference


AGM or EGM Attendance
Just turn up to the Meeting, and Check-in using your RFID access card.
Trustees will also be able to manually Check-in members using a form in HMS 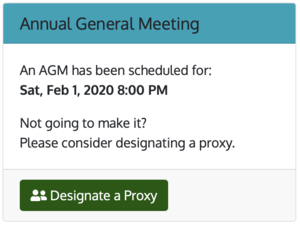 If you know you will not be able to attend a scheduled meeting and would like to pass on your Proxy vote
Find another member that is going to be at the meeting and is willing to represent you.
Log in to HSM and on your home page there will be a button to "Designate a Proxy", this will take you to a page with a link that you can share with your Proxy
Copy the link and send it to your designated proxy via e-mail, slack, sms (what ever works for you)

If you have agreed to represent another member as a Proxy, they will have given you a HMS link to click on
Clink the link and log in to HMS, you will be ask to confirm your representation as a Proxy

Email confirmation will be sent to both parties once the proxy is accepted.

HMS only tracks which member (Proxy) is representing another member (Principal)
If the meeting will include items to vote on, both parties should make sure to talk over the Principals opinions and how their proxy votes should be cast.
Most votes, including Resolutions to change the Constitution, are asked as a Yes/No/Abstain decision.