This page will detail how to get the best out of LaserCut.

What is a cut versus and engrave?

The only difference of the two is that an engrave covers a bounded area with lots of small cuts. This means you can "engrave" lines into something using just cuts of a lower power.

NOTE: The demo software will crash in the demo on A0 "Silvertail" settings. Please change the file "syscfg - Silvertail.ini", find "NeedRevise=1" under section "[TWOAXIS_0]" and change it to "NeedRevise=0" - a revised download may be provided soon.

The software has some oddities - there are things hidden behind scroll bars and please note: the enter key never saves settings (in many cases) so you must click "Ok" to save things.

Also at the moment the word "Download" really should be "Upload".

The long-running tools (such as "Preview" and "Calculate time") have no cancel button but pressing escape seems to exit them fine.

LaserCut does not import direct SVG files; it requires more simple files to import. It can also work with images directly using them to direct engrave areas.

These line file formats can be imported:

You can also import previously made ECP files by typing *.epc in the File Name: box and selecting Open - this will only import the lines and colours not the power settings or order, but is a reasonable way to save time if you wish to just get a completed design ready but don't have the original DXF or SVG. 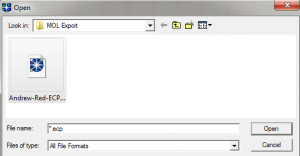 These image file formats can be imported for engraving work:

If the program continually crashes importing, first of all entirely restart the program, and possibly de-select "Preview" so it doesn't read the file (it can fail if the file is open by something else). Otherwise INI file has become corrupt (perhaps on a crash of the program). Copying the original again by running the bat file fixes this.

Make sure you use Unite Lines under the Tools menu to join up all the pieces of an imported file. The tolerance value is the distance between separated pieces - 0.01 is a fine value for this. Click Ok and the pieces are joined up to make the laser cut both more efficient and much more rigorous in keeping your design correct.

Saving in the demo:

Exporting the final thing to load:

NOTE: Both the demo and normal program can export .MOL as long as you have not used the tool Data Check (under Tools -> Data Check) since this causes it to crash. To fix this either re-apply the default config file settings, or remove the line CheckLayerCode=-1 under [DataCheck] in the "syscfg.ini" file.

Select the option Set array output options from the toolbar. This will help create copies of an object which can be altered so they overlap nicely. It isn't a perfect way to tessellate an object (using one cut line for two objects for instance) but is good enough for non-tessellating objects to be multiplied for multiple copies quickly, and is a lot easier than using Inkscape to do the same thing.

When importing a DXF file the main primary colours are retained. See the Inkscape page for how to setup the correct palette for exporting valid colours to DXF. There are more advanced options available and other formats may retain further colour. For simple jobs you can also recolour the objects in LaserCut itself.

You can use multiple colours in a design to separate different types of action; for instance a good practice may be to have:

If this method is used it can be easy to import a DXF file which has the correct layers already set up. For instance:

Simply put: please don't change any settings under File -> Machine-Options since the given settings are for the A0 laser we have, and incorrect settings can break the laser.

There is a desktop shortcut to reset the LaserCut options. 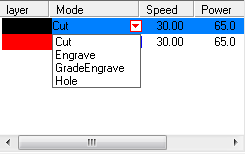 These are some recommended numbers to take into account:

Remember: Power and Speed affect the cuts/engraves equally; a slower cut of 30mm will cut through 3mm wood at 65% power, while 600mm at 65% power will only engrave the wood partially. Equally a higher power at the same speed will cut deeper.

A cut is a single run of the laser at a set power along a desired line. This line can be at any angle, or in circular patterns.

This means you can either cut through a material or leave a thin engrave line the exact width of the laser; around 0.1mm size. 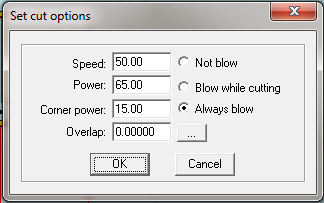 Engraving means the laser is moved over an area with a lower power or faster speed to allow the surface to be engraved with a pattern. There are further options to decide the gap between the scan lines which cover the area.

Note that any line you select for engrave which doesn't contain a contiguous area will still be engraved, just it will overlap with where the line is. Check the preview for how this looks. 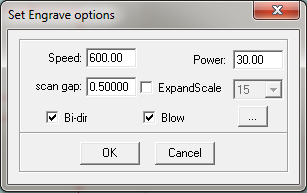 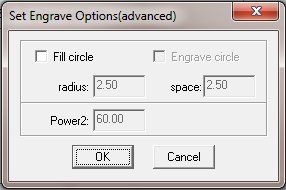 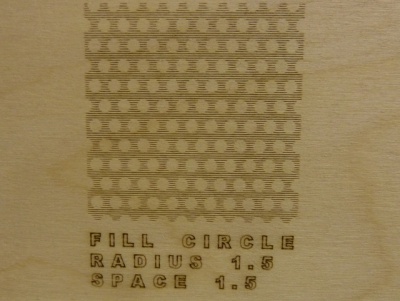 Sample output when engraving a simple square with only the "Fill circle" option checked with a radius and space of 1.5mm 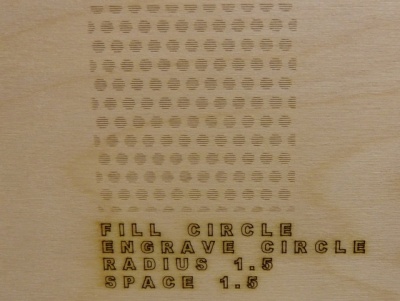 Sample output when engraving a simple square with both the "Fill circle" and "Engrave circle" options checked with a radius and space of 1.5mm

Grade Engrave will cause an area inside a engraved area to have raised edges. It is intended for easier rubber stamp making but can be applied to any real use. It is easiest to show with pictures: 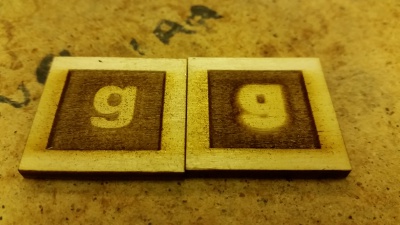 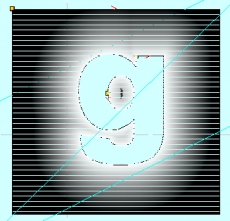 There are options for this similar to Engrave: 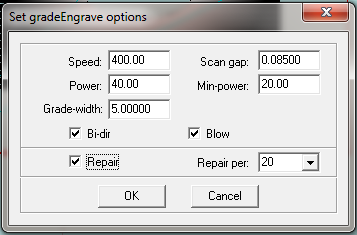 This may be useful for marking small areas or centres of objects and has two main options:

This puts a single laser cut at a specific power in the middle of all the selected objects. This could be useful for marking where things will end up, or for shapes like circles having the center marked (maybe after cutting and engraving it initially) for where attachments go. The output looks like this:

Single holes in the centre of objects

Holes on the lines

When Hole on center is not ticked, it will allow you to have single laser holes cut at intervals. This may be useful to put perforations in paper or card (although they may not work very well!) or for marking areas or having a different style of line engrave at lower powers. The output looks like this:

Holes along the lines of objects 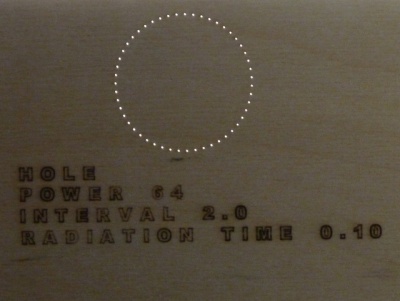 Sample output when engraving a simple circle with the power set to 64, interval to 2 and radiation time to 0.1

Note: Setting the interval too low (eg: 0.1) will essentially result in a cut which is made up of lots of holes and will result in a bad finish around the edges.

This option is only in the Demo and does not appear in the final application. It crashes the Demo. Probably an oversight by the LaserCut developers. Do not select it!

The DownLoad button will connect to the laser cutter to change what file is loaded (or in the demo allow exporting of .MOL files).

It will when successfully connected display what files are already on the laser.