From Nottinghack Wiki
(Redirected from Project:InterhackerspacePBX)
Jump to navigation Jump to search 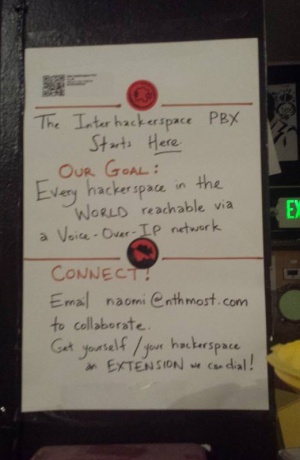 Our Goal: Every hackerspace in the WORLD reachable via Voice-Over-IP network

Rob (Sideshow) was in hanging out at Noisebridge in SF in December 2014 and saw the notice above posted there, sent me a picture and I got in contact with the Noisebridge folk, and now we're getting all excited. This is fun. Mouse (talk) 11:00, 5 December 2014 (UTC).

The Primary software behind the PBX is the FreePBX distro of Asterisk, a free open source PBX. To hook up analog devices like the payphone and ERT's, we'd need an FXO adapter card somewhere, so Asterisk would probably have to run on some sort of always-on PC with a PCI slot (since multi-port FXO cards tend to be PCI). An alternative to this might be to use an RPi with USB soundcard to convert analog signals into SIP calls which could connect to the Asterisk instance. This Pi idea is being used for the payphone conversion, with some SIP business phones and a PoE switch being donated by Alex.

Asterisk can connect calls between different devices at the space (extensions), and make outgoing calls to external destinations over the Internet by using some prefix for "outside line", e.g. dial 9 for external numbers.

Asterisk can also handle incoming calls from other spaces (e.g. Noisebridge or general SIP calls over the net), either directing them to the payphone, voicemail or an IVR system which we can have a lot of fun making very silly. An IVR would be cool if someone funny wants to write a script, external calls will likely default to the payphone unless an extension is specified. Alternatively, all phones could ring until one is answered.

I would suggest the following for a serious IVR:

Pressing 1 can give a short voice overview of the space, followed by our web address to find out more, e.g. :

Pressing 2 (or pressing 1 after the voice information) can ring a number of phones. I would suggest these calls ring the phone by the front door, and maybe also the payphone in the studio, but not any of the work area phones.

Pressing 3 should give another prompt, followed by transferring the caller to the entered extension:

The following IVR was taken from a suggestion by Mouse in the original thread on the Nottinghack Mailing List:

Pressing 1 can forward to Mouse's extension of 2600. Pressing 2 can play some prerecorded insults (randomised from a list). Pressing 3 can do what it says on the tin. Same with 4. Pressing 5 can play Rick Astley - Never Gonna Give You Up.

These will be the initial extensions that I will configure, plus the following member extensions. Further extensions will be added when I can get hold of more phones.

Any member of Nottingham Hackspace will be eligible to request a four digit extension in the range of 1000-9999 (just add a line to the list above for now, or once the PBX is functional drop me a message at alex@alexmann.net or leave a message on my voicemail from a phone inside the space). Multiple extensions can be requested, and members will generally be allowed up to 5 extensions. Members working on the PBX Project can be allocated larger ranges for testing and development purposes.