From Nottinghack Wiki
(Redirected from Project:Quadrocopter)
Jump to navigation Jump to search

"A quadrotor, also called a quadrotor helicopter or quadrocopter, is an aircraft that is lifted and propelled by four rotors."

I've been flying model helicopter on/off for a few years and have now started to build a Quadcopter. As this is my first quadcopter I'm going to try and detail as much as I can here, some of this is likely just to be a bunch of random notes and not make a lot of sense to any one else, but as always I'm happy to explain if you can catch me at hackspace. --'RepRap' Matt 15:33, 15 August 2011 (BST)

Break down of part that need connecting to the mbed 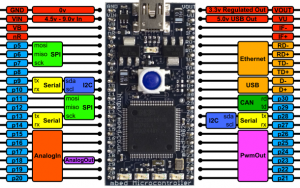 Breakdown of the serial protocol use by the Spektrum Satellite receivers. 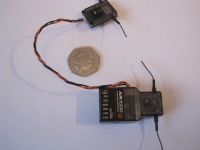 I have a Spekturm DX7 transmitter which i use to fly my trex450 and my blade mSR. the Spektrum uses a 2.4ghz signal rather than the older 35mhz or 75mhz FM signals. On the tre450 i have an AR7000 receiver, one of features of this and other Spektrum receivers is the use of satellite receivers as seen in the picture to the left, theres satellite receivers are use to help maintain a solid signal between the TX/RX, usual located in a different location on the air frame in case the signal to the main antenna is disrupted. Now interestingly the data is sent between the two using a 3 wire cable using basic serial! For my quadrocopter this is great news as it means i can just plug the satellite straight into the MCU and read the serial data to get the TX data.

I found hobbyking do a range of Spektrum compatible receivers under the name OrangeRX, i have order a 6ch receiver and a satellite receiver for use in the quadcopter.

The satellite receivers run at 3.3v so if used with and arduino would requirer some protect against the normal 5v logic.

The serial link is standard 8n1 @ 115200baud (but i have seen mention of 125000 baud on some forums, need to investigate) it sends 16 bytes of data at 22ms intervals. The first 2 bytes are frame data, the following pairs of bytes contain the channel data.

It is also possible to bind the RX by pulsing the data line just after the RX powers up, need to send between 3 and 6 pulses each between 116us & 120us in length. 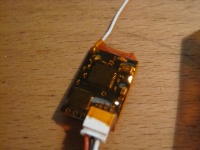 First IMU will be using sensors from the motion plus and the nunchuk.

The motion plus incorporates a dual-axis tuning fork gyroscope and a single-axis gyroscope, while the Nunchuk has a three-axis accelerometer, data from all of these can be accessed via 400kHz I2C bus which the Wii remote usually use to talk to them. These can be put together to form a basic IMU for the quadrocopter.The reading from the gyro and accelerometer have to be read one after the other rather than at the same time. This slows down the sample rate as can only retrieve one set of data every 3ms (one wm+, one nunchuck, one wm+ and so on).

I already have a nunchuk which i have used to control my Arduino tank and have picked up a motion plus from ebay to try out.

Second generation IMU using all I2C sensor board for eBay

This boras has the following:-

So I ended up ordering the version 2 of this IMU, which includes a GPS as well, I don't have immediate plans for the GPS but it worked out cheaper to get it built in rather than a separate module later. Someone has all ready build a NEMA GPS library for the mbed although I don't know how useful this will be for my firmware designs.

I like that this IMU comes in such a small board its no bigger that the mbed! Should go nicely along side it when mounted on the quad. I plan to make up a carrier board that this and the mbed will plug into, along with connector for all the other interfaces.