This page will show the network topology & proposals for network expansion / modification. 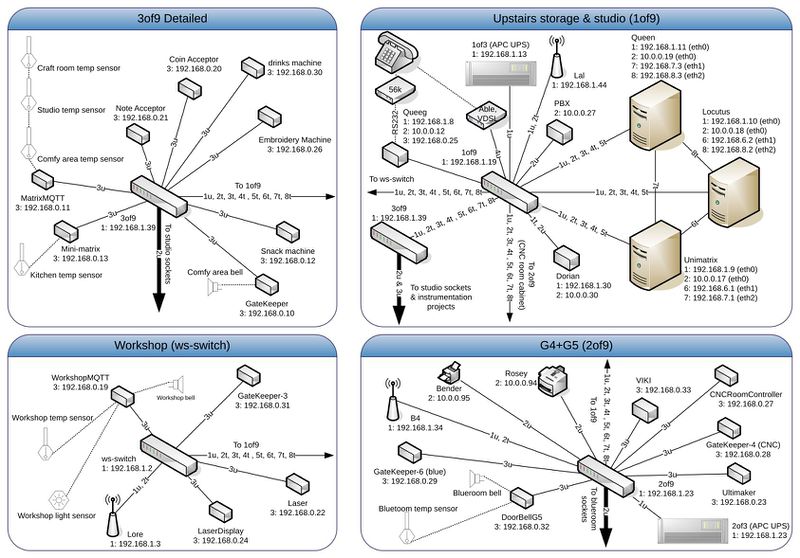 Able is Kryten's brother the Linksys ADSL2MUE modem that talks to the outside world.

Kryten is Linksys WRT54GL running DD-WRT VPN Build, he handles all our DHCP, routing from the external world and WiFi.

WiFi for Hackspace SSID: HSNOTTS passcode uses WPA2 protocol AES encryption. Members only, passcode on request, changes to the passcode will be posted to the members only Google group.

WiFi for guests is setup as HSNOTTS_GUEST and passcode can be provided and this will run on a seperate VLAN.

The Nottinghack VLAN has access to local resources - e.g. a future NAS file-share , a local dropbox server for projects & collaborations, a backup of all Web / Wiki files (to allow a remote restore in the event of moving hosts / outage of services) and anything else we don't want to be web facing.

The VPN (when enabled) would allow remote management of the VLANS, which could come in handy in the event of issues with the client WiFi access point.

Router management username & password only for Authorised members only. If there something you need changing ask on the member group or speak to 'RepRap' Matt or Tony S

Note this router is on long term from Tony S until the hackspace has something better - feel free to donate an upgrade ;)

Usual rules apply, as to any tool - if you don't know how to use it / don't do anything :)

Hosted locally at the space on Holly