Workshops and sessions about the Raspberry Pi for new users, experienced users, and users to be! 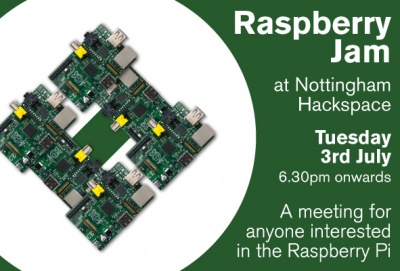 The Raspberry Pi is a great low power computer the size of a business card. It was originally designed to get kids into programming. However its low price point of £25 and the wide range of uses meant that it was an instant win with programmers and hackers the world over!

After a very busy initial sales day over 70,000 units, there are now many Raspberry Pi in the wild. Here at Nottingham Hackspace we have our fair share of Raspberry Pi enthusiasts, so we thought we would arrange a Raspberry Jam.

Still waiting for your Raspberry Pi? Come down and see one in the flesh, find out about what you need to get going when it does arrive.

Only just gotten your Raspberry Pi? There will be a wealth of people to give you pointers and show you how to get set up.

Had your Raspberry Pi for a while now? If you consider yourself a Pro, and maybe have some initial projects to show off, then bring them down to show others, and get some feedback and ideas.

Either way, there is going to be a room full of Raspberry Pi enthusiasts to discuss your ideas with.

We will have a few talks from Hackspace Members, or from anyone who turns up on the day with something to talk about.

So come on down to Nottingham Hackspace on the Tuesday 3rd of July for a free open evening dedicated to the Raspberry Pi.

Focus on new users (everyone is new! Some have plenty of embedded Linux experience (like me!) but the devil is in the detail)

"I think we should emphasise that this is _especially_ for those who haven't yet received their Pi (i.e. most people) and that the Jam session will allow them to get their hands on one for the evening and to plan their project during this unique time: the preparations can be underway with SD card testing, trying out power supply options, choosing a basic Linux distro, USB peripherals, etc."

For users waiting for their Pi to arrive...

Take a lead from MadLab: http://madlab.org.uk/content/manchester-raspberry-jam/

I'm expecting it to be rather "drop-in" so I'll give a brief talk when there are enough people in. The talk will be pretty general but with a GNU/Linux background (my historical skill area!). BTW: it's ten years(!!!) since I built the PiXie GNU/Linux distro which I presented to Nottingham GNU/Linux Users Group on Wed Feb 5 2003 (see http://mailman.lug.org.uk/pipermail/nottingham/2003-January/000478.html) --Michael Erskine 07:44, 27 June 2012 (EST)