An Arduino interface to save the precious Raspberry Pi from the outside world.

The presence of GPIO on the Raspberry Pi opens up the world of physical computing to a new audience of hobbyist programmers and this can only be a good thing. I ran a few simple GPIO tests using Perl to drive the memory mapped /dev ports just to light LEDs and read pushbuttons but I have to say I was truly scared that I would damage my precious Pi! The GPIO is rather "raw" and the pins have no protection. Just fitting a plain cable to the 26 pin header with nothing attached, I am quite able to cause hangs and crashes! This is known behaviour: from http://elinux.org/RPi_Serial_Connection#Unwanted_serial_garbage_input ...

Note that on older software by accident the internal pullups of the RxD GPIO pins were not enabled, this could lead to lots of serial garbage being picked up if the GPIO pin was touched, or even if a finger was nearby. In extreme case this could lead to kernel warnings and other problems.

I get this with 2012-06-18-wheezy-beta but I guess there's a fix coming in the next kernel and things will improve in good time.

All things considered, it seems to me that I need to build a protection board for the Pi...

And then I'd have to rewrite all my perfectly functional Arduino sketches to run on the pi...

And I'd need to find an analogue to digital converter for my analogue inputs...

And then I'd no doubt run out of Digital pins...

And then I'd want to use digital inputs with interrupts...

So, why not just use an Arduino and talk to it over the Pi UART? An ATMega328P is about £3.50 and I don't care too much if I blow one up. If I blow up my Pi it will be months before I can get my hands on another!

OK, so I'm convinced: I'll build an Arduino clone that plugs into the Raspberry Pi. 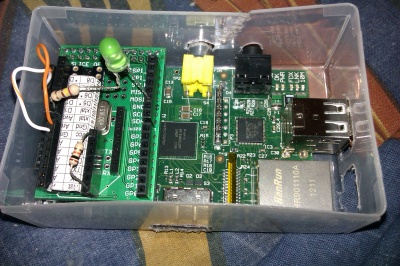 This first one uses a Ciseco Slice of Pi -- I was feeling lazy and didn't want to spend too much time looking for bits and besides, there were loads of them in the vending machine at the Hackspace for just £4 so it's a no-brainer!

The proto board is just big enough for the 28 pin DIP - I desoldered a couple of 16 pin DIP sockets from an old prototype board found at the hackspace. This leaves me with 4 spare socket pins at one end which I'll no doubt use in the future. 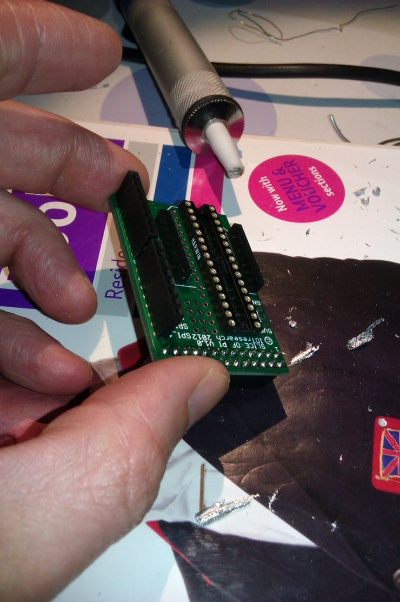 I had to break up one of my breadboard minimal Arduino clones for parts - no big problem, they're easy enough to make. This one is just an ATMega328P, a crystal, two capacitors, and a 10k pullup on the reset pin. I won't be needing the little 5v voltage regulator board as I'll be taking power from the handy 5v on one of the Pi GPIO pins.

This minimal Arduino can be crammed onto the Slice of Pi protoboard. Here on the underside we can see: - 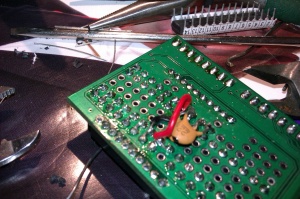 The clearance is OK. It doesn't help that I soldered the 26 pin GPIO connector slightly wonky! I'm going to use a little insulating hat on the can at the loose end to support the slice. 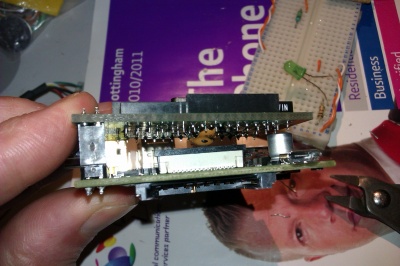 Now, one thing I've been careful to do is to keep the entire Arduino circuitry completely separate from the Raspberry Pi circuitry. I only want them connected together when each Arduino circuit I try has been proven independently. The connections for power are simple enough: the Slice of Pi has 5v and GND from the GPIO broken out nicely on pins at the edge. On this picture I have the power, the pullup for the reset pin, and a blinky LED (with current limiting resistor) on pin 13. I've named my Pi Frambozentaart which is "Raspberry Pie" in Dutch!

Programming the 328 is straightforward enough with my FTDI-board I got some time ago - any FTDI or Prolific PL2303 USB-UART will do. Initially I'll be disconnecting from the Pi for programming but it makes sense to eventually program the 328 directly from the Pi UART using avrdude.

The Pi UART on the GPIO (see http://elinux.org/RPi_Serial_Connection) on my 2012-06-18-wheezy-beta distro is on /dev/ttyAM0 and is used as a boot console and getty but this can easily be disabled in /boot/cmdline.txt and /etc/innitab. I've been using trusty old minicom on the Pi for sending data to the Arduino for testing.

The Arduino is happy to receive 3.3v logic on its RX pin but TX to the Pi will require a step-down from 5v to 3.3. I could use a logic level converter like this one at SparkFun http://www.sparkfun.com/products/8745 - however, I've found that a simple voltage divider works for most jobs (it worked well on my Ghetto Arduino SD-Card). You can go from 5v to 3.3v with 2 resistors that give a 66%/33% split (3.3v is 66% of 5v) or with 3 identical resistors.

Here's some quick C code to setup and use the /dev/ttyAM0...

This next photo shows the recently added power and blinky LEDs which are plugged into the spare pins of the DIP socket. The power LED has a higher than normal resistor to limit the brightness since this will be on more than the blinky (on PIN 13). The 10k pullup for the reset pin has also been permanently fitted. All the resistors are under the DIP socket - I used tiny ones when I could find them. 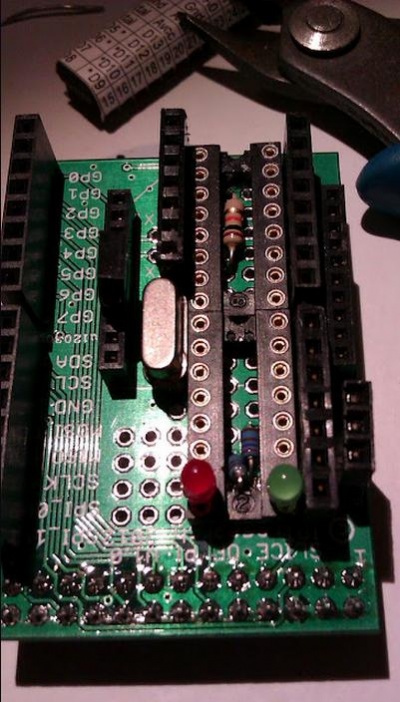 It's getting busy on the underside of the board!

I've now added the voltage-divider to step down the Arduino TX from 5v to 3.3v logic - I got hold of three 12k surface-mount resistors from the service department at work (thanks Jaspal!) and spent a good part of lunchtime pushing them around my board with a hot iron until I got them nicely in place. 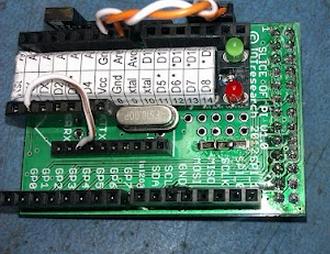 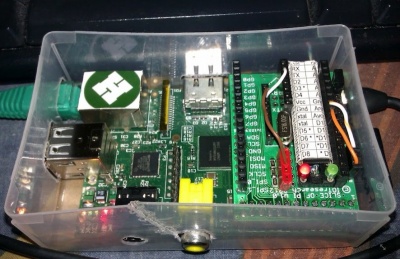 Yesterday I set up another SD card with the new Raspbian distro and tonight I've been getting a nice little Perl script to run that reads and outputs the data from the Arduino test sketch (currently a cut down version of Cheesoid MCU1 code) and sends out a watchdog kick every 9000 ms (giving the watchdog LED time to go out). I'm using the Device::SerialPort module in a rather conservative way with reads of up to 255 bytes with a 100ms timeout. It all just works perfectly! When the Pi is being reset I can often get masses of seemingly random data appearing. This is quite easy to detect if necessary. --Michael Erskine 18:07, 20 July 2012 (EST)

Coming up: teeny-tiny shields for rotary encoder and others