The Rubik's Cube is widely accepted to be the world's best-selling toy. It is essentially a logic puzzle in the shape of a cube that is cut twice along each axis to allow the faces of the cube to be twisted. Each face is coloured differently so that when a face (or slice) is turned, part of the adjacent faces also turn. This "scrambles" the puzzle and sets up the player to rearrange the movable parts to restore the "solved state" where each of the coloured faces is complete.

NB: this is a huge subject and so from here I will concentrate on how we at Nottingham Hackspace have enjoyed the cube and how we teach solving the cube in our workshops.

The cube is full of mathematics and geek chic but is surprisingly easy to solve. We teach a semi-formal method that breaks down the large problem into a number of reasonable sub-steps. Depending on your frame of mind the method can be taught in a couple of hours, learned from the notes in a weekend, and memorised in a week or so. Armed with this knowledge, a successful learner can solve the cube from any of its 43 quintillion valid permutations within a couple of minutes and, with a little dedication and practice, quite consistently within 30-40 seconds. 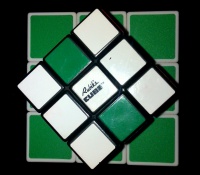 As part of the Hackspace events calendar we like to run the occasional cubing workshop where you can learn to solve the cube with our efficient beginners’ method(*).

For those who can already solve the cube I will be teaching easy progressions that build upon the beginners’ method (or any other recognised method!) with a view to full Fridrich/CFOP competitive speedsolving (see http://www.speedsolving.com/wiki/index.php/CFOP).

The cubes I’ve bought for this year are the Ghost Hand 2 speedcube which is well respected in the international speedcubing community -- see this review by Victor Iglesias (aka pestvic) http://www.youtube.com/watch?v=e-RxZ6ar_tc -- I’ve negotiated a good bulk price for the Hackspace and workshop attendees can have these for around the cost price of four quid (I think we will have about 27 cubes to go round) plus a quid or two donation to Hackspace funds.

(*) our Hackspace beginners’ method is based on badmephisto’s second beginners’ method (http://badmephisto.com/beg.php) and will teach you to transform any of the 43 quintillion unsolved permutations of the Rubik’s Cube to the single solved permutation [**]. I have taught quite a lot of people to solve the cube (including myself!) and it's really quite straightforward -- YOU CAN DO IT!

[**] see http://faculty.mc3.edu/cvaughen/rubikscube/cube_counting.ppt for some fun maths!

When describing the moves and sequences of moves (aka Algorithms) that we use when solving the cube it is much easier when we share a common conventions and notation. We have chosen to follow the most widely accepted notation that is now used by cubers worldwide.

The 6 faces of the cube are identified from the cuber's point of view using a single uppercase letter as follows...

Double moves which turn a face 180 degrees are followed by 2, so L2 is a 180 degree turn of the Left face. You may note here that on the Rubik's cube and similar cubic puzzles a double turn has the same effect whether it is clockwise or counterclockwise: R2 == R2'.