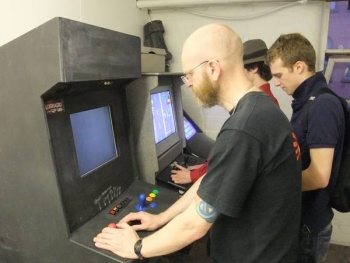 Michael playing on the MAME machine during Barcamp 2011

Performance woes with SDLMAME in fullscreen.

The development pages from some years back: http://www.tecspy.com/arcade

I have now replaced the replacement PC! Seems to work mostly but some full system freezes have happened :(

MAMED has now been built and it works! After all these years the SDL libs are still compatible.

The keyboard controller seems to work!

The machine is now in the studio (again!) and we have a working PC with a recent Xubuntu, functional mame install and all three DVDs of ROMs installed. The next stage is to get the mamed front-end starting automatically as an unprivileged user.