The wall of faces will have members' photos and names on it. They will light up if a member is within the space.
This was started as we grew and people could not put names to faces of members.
This is an opt-in idea, people only make their unit if they would like to.
Obviously a high-tech touch has been added.


The wall will comprise of a number of boxes. Each box will have the members photo and name.
The boxes will be laser cut and all fit together to build a whole wall.
Each box will also contain a circuit board. This will have LED backlighting and a microcontroller (probably an ATtiny48/85).
When a member is in the space (via their RFID tag) then their image will light up.


Members do not swipe out, so at the end of every day then all the backlighting will reset. This will give a record of who was in the space that day.
An alternative of the above, of staying on till midnight, is that each box stay's lit for an amount of time (1 Hour?) after there last card swipe

This will probably be in the form of a kit which members get the chance to build - including laser cut pieces and soldering the board.

The boxes will be 60(h) x 60(l) x 30mm(w).
The design was created using BoxMaker.
More on making project boxes is here http://support.ponoko.com/entries/20344437-laser-cut-project-box-tutorial.
The initial prototype is here: 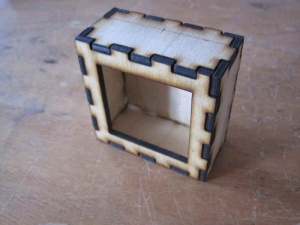 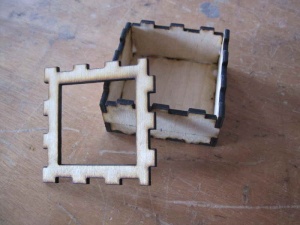 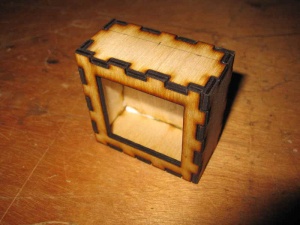 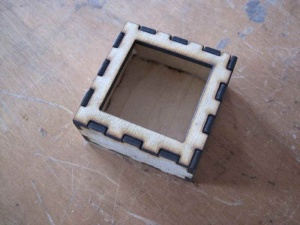 Simple code - when a command comes through (a unique identifier) then the light swicthes ON (also can send an OFF command).

Found this that might just work for us, maybe with a tweak to 10bit address
http://code.google.com/p/codalyze/wiki/CyzRgb

Need to define the command system for turning on and off the RGB led's
Needs to be simple so that changes down the line to add more functionality are only needed at the Main Controller rather than re-flashing every module
May follow BlinkM command structure http://thingm.com

Using the 10bit addressing with I2C
http://www.i2c-bus.org/addressing/10-bit-addressing/
Standard TWI/I2C on avr uses 7 bit address space this allows for 0-127 devices on a single bus, its possible to use a 10 bit address space but its going to need some custom code for both the ATmega328 and the ATtiny85 :(

x Only available in subversion head.
2 Max 10 lines. Only valid commands are go and fade to RGB. Script number 'n' is ignored, can only write script 0
4 current head version returns 0.1
5 only script 1. no predenfined script 0.

A controller will be required to take the info from gatekeeper (which knows when an RFID tag has been read) and output a command to turn on the correct box.

The Gatekeeper process on Holly will send ON commands with unique member id's
Posible a nanode with NanodeMQTT to decode the MQTT and then send commands out via the I2C bus.