As per the project announcement on the mailing list, the goal of this project is to create a robot capable of serving (some) cocktails. Some pictures of cocktail robots can be found in the presentation shown at open night on 2014-03-26.

To have a functional booze-serving robot ready to take to EM Fields at the end of August 2014.

Collaborators wanted! We're moving from prototyping individual parts to putting the machine together now. Task with which we could use help/collaboration:

See also: Makers page to see who's doing what.

The goal is to have a working robot to take to EM Fields which is at the end of August 2014. More details of sub-project deadlines / goals on the BarBot/Project timeline page.

I'd like to keep track of how much is spent on what so I can look back at the end of the project and have a good idea of what it costs to do something like this. I'd also like to reimburse anyone who spends more than their fair share. Please track expenditure on the Purchases and expenditure page. 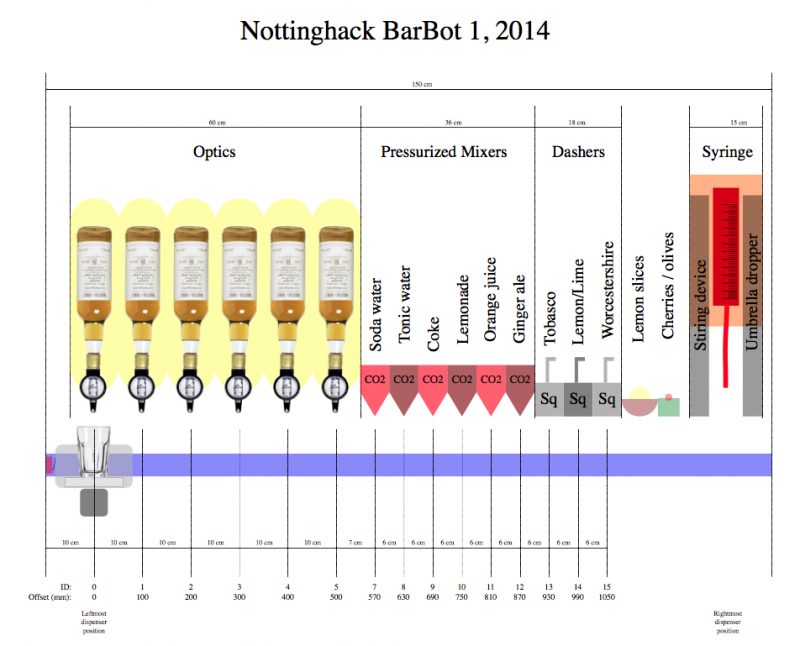 Distance is from the far left. and to the centre of each station.
For coding distance from end stop subtract 105 mm Actual drop position for the umbrella may be.

See separate pages with details of each device Project:BarBot/Components

I want to take a bunch of drink to EMF camp and serve free cocktails. The gifting culture is a wonderful thing, and necessary to avoid conflict with the event licensed bar, but it means we have to fund-raise before hand do buy the stuff. We'll have to fork out for:

I want to serve on Friday and Saturday nights, for about 3 hours per night. I think we can probably serve one drink every 2 minutes, which means we're going to get through about 150-200 drinks. Assuming 200, with an average of 2 * 25 ml shots per drink, and 50ml of mixer, that's:

Basically, we're looking at a £200 bill for all this if we're going to get cheap booze... more money means better quality boozes.

Building the whole thing is going to cost moneys. So far (as of June 11th 2014), people who are working on the project are buying components they need them, and (I hope) filling in the Purchases and expenditure page. However, costs are going to mount and I'd like to reimburse people for the money they've spent. We also need money for supplies, and to pay for a van to take everything to EMF camp.

I'd rather not pan-handle, so here are some other ideas:

To date, Barbot has been run at the following events: